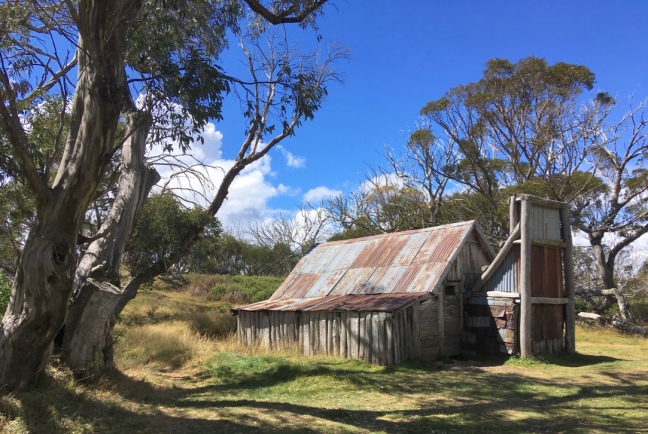 When you think of the hut-to-hut hikes, places like the U.S. Appalachian Trail, Switzerland and Ireland probably come to mind.

Add Australia to that list. The country offers several hut networks for hikers (and skiers).

Among Australia’s huts are some 200 historic huts, with some being more than 150 years old. Cattlemen, gold miners, lumberjacks, skiers and bushwalkers built the huts for shelter in often harsh and isolated conditions. Aboriginal Australians even used some huts as camp sites.

The historic huts, which have been restored and preserved, are for temporary use — to be slept in only during emergencies. But you can hang out, get warm and cook in the huts, which typically come with a set of rules and etiquette. (See some basic hut rules at the end of this post.) In Victoria, some huts are not available for public use.

Huts are typically made of wood or iron sheeting and always are unlocked and stocked with matches and some firewood. Here’s a sampling of Australia’s historic huts:

Many huts have burned during wildfires, but Wallace Hut survived. Overall, Alpine National Park has 106 huts, including nearly 60 historic huts.

Wallace Hut is the oldest in Alpine National Park, which has 106 huts, including nearly 60 historic ones. Three brothers — Arthur, William and Stewart Wallace built Wallace Hut by hand from snow gum slabs in 1889. The Wallaces grazed their cattle on the High Plains from 1869 to 1914.

You can’t enter the cattleman’s hut, but you can peek through a window and see its rustic interior. (See photo above.)

The walking track to Wallace Hut starts along the Bogong High Plains Road. The walk to the hut is nearly 1 mile round trip. A longer, but pretty walk from Wallace Hut to Cope Hut — called Wallaces Heritage Trail — is 3.5 miles round trip.

This historic hut offers panoramic views of the High Plains and the Great Dividing Range.

Cattlemen built most of the huts in the Victorian Alps for their use, but Cope Hut was the first hut built specifically for tourists on the Bogong High Plains. It was built in 1929, largely due to lobbying efforts by the Ski Club of Victoria to have skier accommodations on the High Plains.

It’s a short walk (15 minutes round trip) to Cope Hut from the car park on the Bogong High Plains Road. Near the car park are some lovely picnic spots with fantastic vistas of the High Plains and distant mountains.

This 40-mile, hut-to-hut hike is one of Australia’s best. The remote track in Oxley Wild Rivers National Park, which is about an eight-hour drive from Sydney, boasts the Apsley-Macleay gorges, one of Australia’s largest gorge systems, as well as mountain streams, forests and wildlife.

Surrounded by Snow Gum slopes, this cozy hut in the Kosciuszko’s Main Range has a fireplace, dining room, bunk rooms and toilet. The hut is accessible only by hiking, biking or skiing. The Kosciusko Alpine Club has run the hut since 1938 and restored it in 2011. It charges an overnight fee.

Anyone can stay overnight, cook and rest in six huts along the Overland Track. Each hut has sleeping platforms, tables and benches, coal or gas heaters, composting toilets and rainwater tanks, but the don’t have lighting or cooking facilities. Huts cannot be pre-booked, so still carry a tent and sleeping bags.

Three historic huts on the Overland Track — Du Cane, Kitchen and Old Pelion — can only be slept in during emergencies.